The Format of an IPv4 Address

An IPv4 address can be written in two ways:

The most popular, and (in my opinion) easiest way to convert a binary number to decimal is using a table like so:

The network portion and the host portion of an ip address is defined its subnet mask. This process is easy if the subnet mask is classful meaning either:

The process is a little more difficult when a non-classful subnet mask is used. In this scenario binary conversion must be used to delineate the network and host portions of an address. Consider the following example:

The network and host portions are still defined by the subnet mask, just more accurately by seeing the address and mask in binary and identifying the 1s and 0s. The question that you now have to ask yourself is, what is the networkaddress, broadcast address and host addresses if the subnet mask is 255.255.255.224? To answer this question you need to, in binary, logically AND the ip address and subnet mask and you will get the network address. To understand this process and more see my video series on subnetting, ANDing and the Magic Number below. 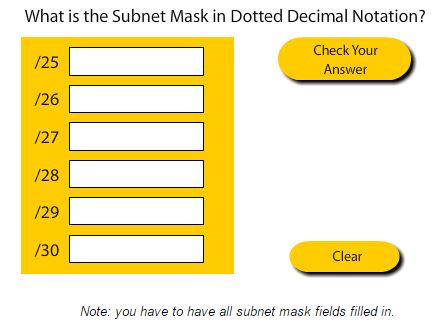 Broadcast Address – The address used to send data to all of the hosts on a network
Uses the highest (last) address in the network,
The broadcast address is reserved and is not usable by a host
The bits in host portion are all 1’s
Also called a directed broadcast

Public Addresses are designed to be used by hosts that are publicly accessible from the internet. Public ip addresses are assigned by the InterNIC and consist of class-based network IDs called CIDR blocks.

In order to understanding of subnetting you need to be able to convert IP addresses from decimal to binary. Subnetting, subnetworks, and subnet masks only make sense from the perspective of binary. The reason you need to convert the addresses to binary is that it is the way routers find networks. Routers and computers find networks by ANDing IP addresses with the subnet masks. If you want to understand the logic behind the process you need to be able to see it from the perspective of the router. In the following video tutorials I lay out the simple process of converting IP addresses and subnet masks to binary. I also cover finding the network portion and host portion of a network or subnetwork mask. I recommend watching all of these videos as as my following series on the “Magic Number.”

In this series of tutorials, I explain how you can easily find the network address, broadcast address, and first and last host addresses from any ip address and subnet mask combination. The ability to calculate subnets is the most important skill for success in the Cisco CCNA. The magic number trick will make that process a snap!